I am not the only one with Spring Fever.

Living in a small town has some unexpected features, one of which is the importance of the 4H fair.  The kids were actually released early from school recently, so everyone could attend the county fair judging the kids crafts and livestock.  Of course my school age girls are now very interested in 4H-especially my 7 year old who has always been animal mad.

This also tied into my husband’s interest in raising rabbits.  He developed the hope that one of the kids would be willing to sell him their fair rabbit to start his rabbit breeding plan.  I’m not certain how I feel that it didn’t work out…

He has since done a lot of research and found a breeder not far away who has heritage American Blue Rabbits that he plans to purchase his first breeding stock from.  We then spent most of a weekend clearing stuff (mostly old kids’ clothes and toys and stuff that didn’t sell in our last yard sale) out of a shed so that he could make it useful as a rabbit hutch.  Additionally, he repaired and expanded an existing cage system that has been sitting in the back of yet another shed.

I have begun to joke that whatever we want the property will provide.  The now named “Hoppe House” (from something one of the girls wrote) is an excellent example of this.  The shed itself existed, and was not well utilized.  We had an exterior door in the barn that had a window, necessary for mammals such as rabbits, so they can have access to sunlight.  Additionally, because of the Texas heat, my husband wanted to insulate the shed, while also making it something that could be easily cleaned to keep the area well sanitized for the rabbits.  We had extra insulation from our remodeling project (that I hope to someday have done), but we were uncertain what to use as interior wall material that would be easy to clean.  We tossed around several ideas, including buying vinyl flooring from the ReStore, but everything seemed costly and time consuming.  Then, oddly, we re-discovered some unusual sheet metal panels in the barn.  They are coated and wipe clean very easily.  There are dozens of them and, best of all, they don’t cost a dime.  This is a winner! 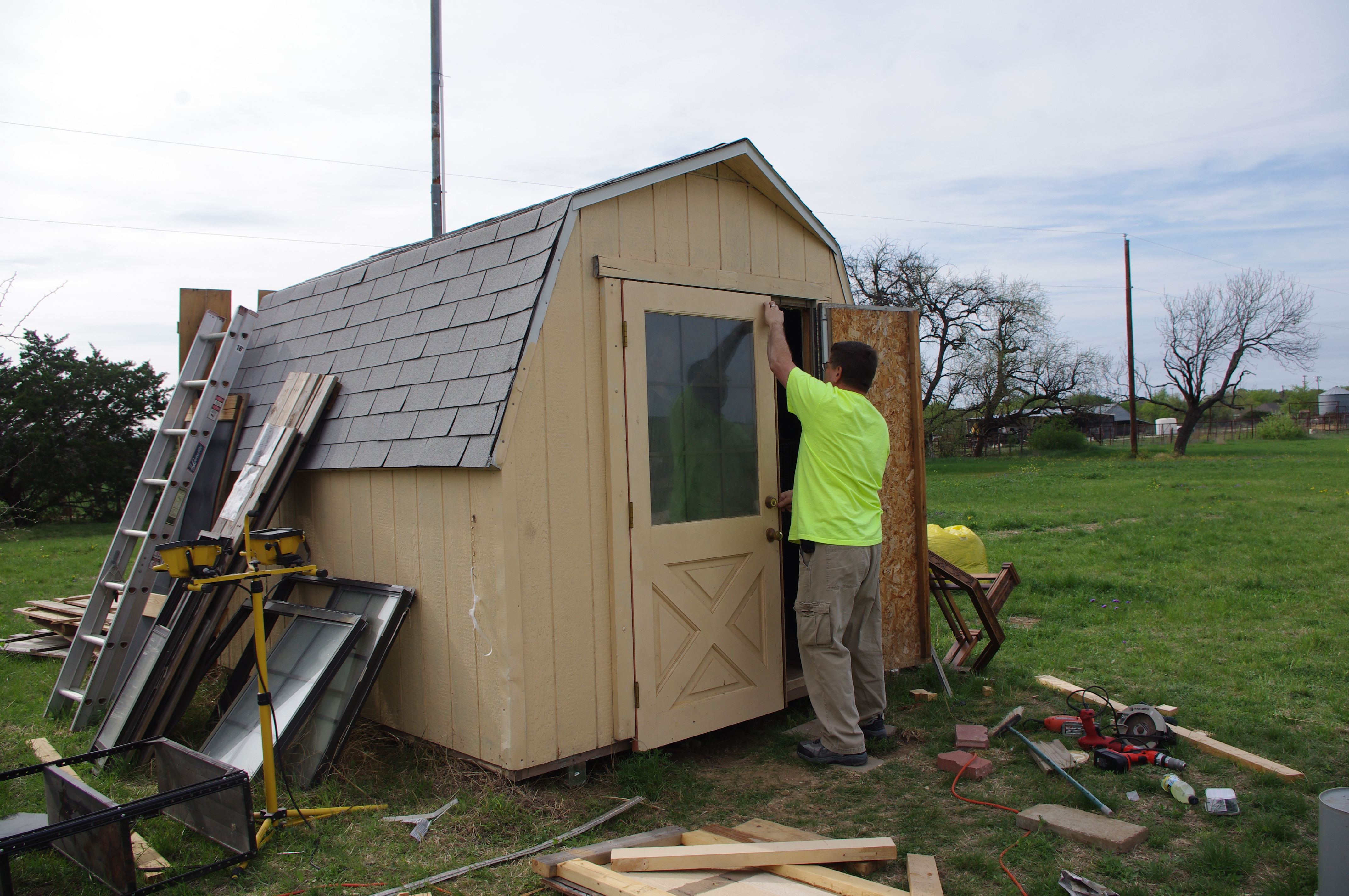 Finally, in his research my husband found that rabbits need special care in the Texas heat (not surprisingly).  It seems they will survive when the temperatures rise into the 90s and beyond, but they go into a kind of dormancy, simply eating and resting.  With this in mind, he decided that the shed needed to have air conditioning.  I was skeptical.  After all, this shed does not have its own access to power, and running electric to it would be a hassle and, because of the hassle, costly.

Then I was reminded of the wind turbine we had purchased two years ago with the goal of having a grid-tied turbine offsetting some of our electric draw for the house.  Unfortunately, when we made the purchase we did not get the right type to set up a grid-tied system.  Instead of returning the turbine, my husband chose to keep it with the intention of adding it to the tool shed and playing with a battery bank.  That had not yet happened, so he talked me into adding it to his new rabbit shed and establishing his battery bank there.  He has spent time setting up some simple wiring, creating a great tower for the turbine, and organizing an excellent system for lights, fans, and soon his A/C unit.

Happily, my husband is well on his way to providing us with some sustainable rabbit meat as a portion of our diet.

28 Responses to Preparing for Rabbits