So, one of my longest standing personal convictions is that we should attempt to fix damaged items, not just replace them.  This goes for a large variety of things from cars to clothes.  Over the years I have taken things from other people’s trash (not digging through, just the curb), because I felt it still had value and could be repaired.  My youngest now thinks everything can be fixed, even the lizard whose leg was torn off by greedy chickens….  Thankfully, my most recent project was much easier than that. 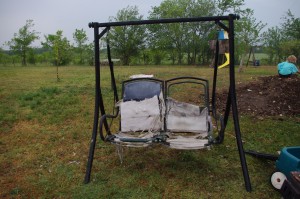 This swing was left on our property by the previous owners.  It was always ratty, smelly, torn and stained and did not compel my attention.  My children would swing on it and, as they became more confident in their gymnastics skills, climb and hang from its supports.  As the younger dogs began to tear it up in recent months I began to reconsider it.  The summer heat (it is June in Texas), and my spending more time in the house, also lead to my deciding it was time to make it useful. 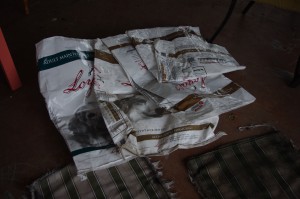 While it was dirty, it was very easy to take the swings apart.  It turned out that someone in the past had taken the time to give it an update, as it had been painted from green to black and the original pads had been topped with additional cushions.  The first pads also acted as the supports, making it possible for me to use them as templates to cut out new supports.  I did not plan for the dog food bags to be stuffed as cushioning or even to be seen.  Thus, I bought some thick outdoor cushions from my favorite online garden catalog and began the work of cutting and sewing dog food bags into seat supports.

As can be expected with any plan, it did not work perfectly at first.

Everything came together just fine.  The problem I faced was that the seats had to be strong enough to support weight but flexible enough to give a bit.  I initially made them just a little too snug.  Additionally, I just used standard thread for my first attempt, but the pressure from the framing and rambunctious children quickly proved too much for it, so I had to upgrade to thread meant to handling the weathering and wear of being outdoors. 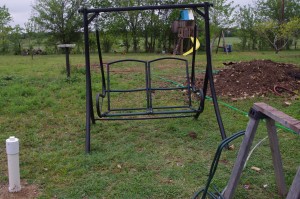 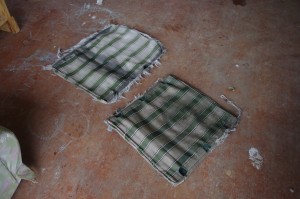 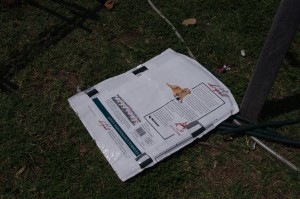 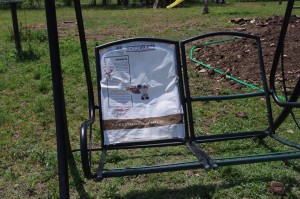 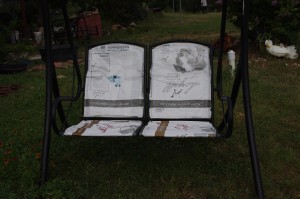 Happily, we can now comfortably swing on an attractive, non-smelly, swing. 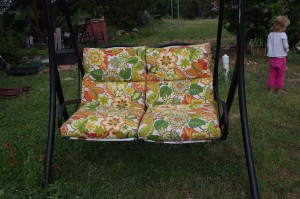 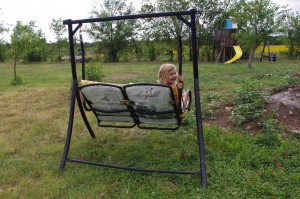 One Response to Updating an old Swing