As often happens with folks who were not raised on farms, we find ourselves learning new things on a daily basis.  This lesson revolves around our rabbits.  While I had a number of different pets as a child, rabbits were not welcome in our household, so I have little knowledge and now just a year of experience with them.  Compared to my knowledge of dogs, cats, or domestic birds, I often feel like I don’t know anything, and our recent experience reinforced that feeling.

We have four mobile pens, some would call them tractors, of various sizes and materials, we use for having smaller prey animals on pasture here on our property.  The first (and heaviest) mainly gets used for chicks.  We also have a much smaller one that can be covered for the same purpose that was made as I began to incubate eggs with the goal of hatching our own chicks.  Finally, my husband made two specifically for use with the rabbits, one we called our “grow out” pen and the latest one that has been our “colony pen.” 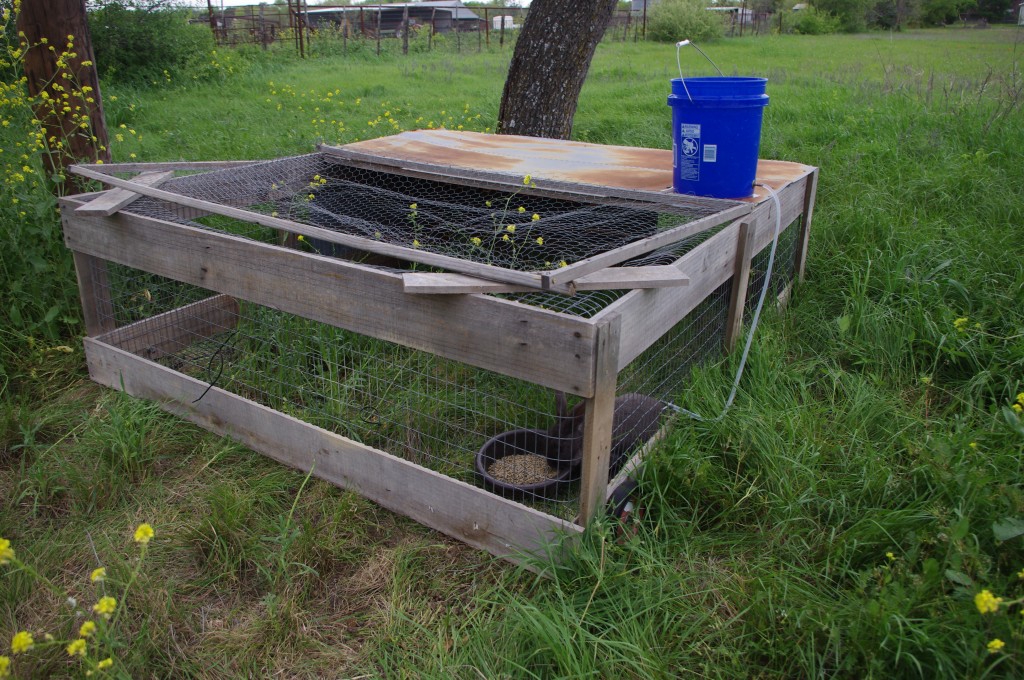 Our first Grow Out pen

When the weather cooled and we decided to breed our rabbits again, our first attempts were not successful.  We weren’t sure why, but our buck wasn’t making the necessary connections, and our does weren’t producing any babies.  After some research, my husband felt they had eaten too well on their breeding reprieve and were too fat to become pregnant.  In order to improve their health, and because the weather was suited to it, we put our bunnies on pasture in the large, PVC framed colony pen.  We had three goals with this: a) to increase each rabbits physical activity, b) to reduce the pellet food we were feeding them, and c) to allow longer access to increase the potential for “catching” a pregnancy. 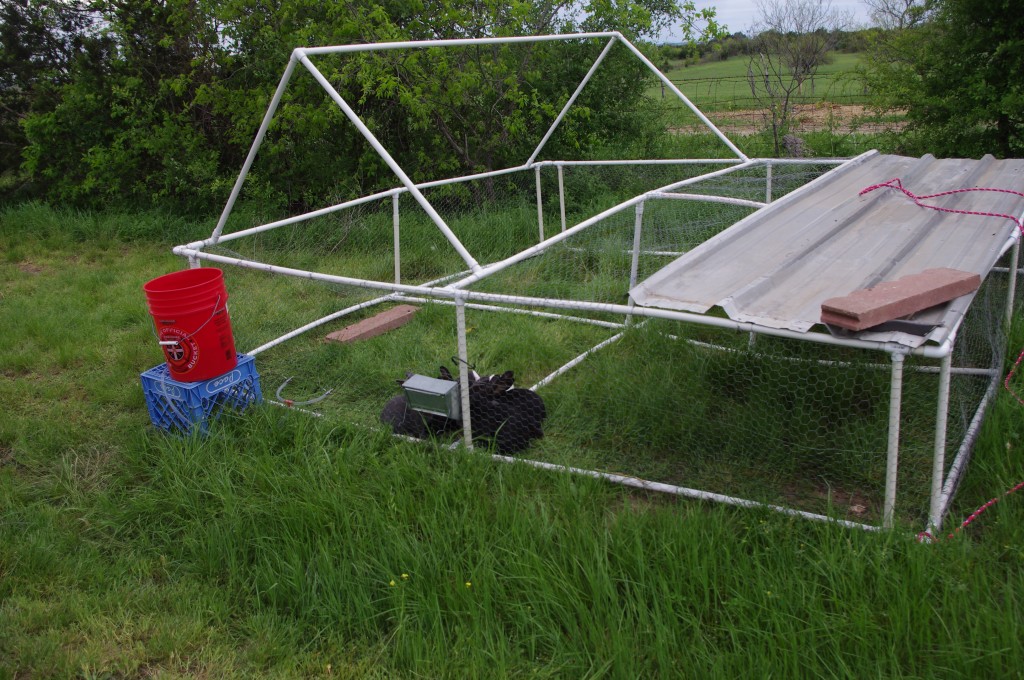 Our Colony Pen, minus its shade tarp.

The first doe to become pregnant in the colony pen started nesting a full 24 hours before giving birth.  We were able to move her into the smallest mobile pen, provide her a nesting box, and had a successful and healthy litter.  Slowly, the other two does began to show signs of pregnancy, and we felt our colony plan was successful.  We decided to allow each of our three does to have two litters in close succession, then we expected the weather to become too warm to safely keep them on pasture and we would move them into their indoor warren and separate pens, as they had been, before.

Then, something odd happened.  The mother of the second litter had been with the bunnies for nearly four weeks.  All of the babies were healthy and eating on their own, and we were planning to move her to a separate pen for a week (rest and recuperation time) and then back into the colony pen with our buck.  However, during the nightly feed, my husband found a brand new baby in the pen.  We were stunned.  Where did it come from?  None of the 4-week-old babies could have produced it, and the momma wasn’t showing any signs of pregnancy.  What was going on here???

No problem, we thought.  We took the baby to the momma that had the youngest kits, did a surrogate nursing, and brought it into the house to put in a heated box, planning to hand rear it.  In hindsight, this was a terrible plan!

We had another problem, we had three pens (the fourth currently has a flock of cockerels growing out in it) three growing litters, and no room to move the adults the way we wanted.  Additionally, our buck, having been separated from his harem for a couple of weeks, was very depressed and skittish. We decided to combine the two oldest litters (weaned and weaning) into the colony pen and place the doe on recuperation in the smallest pen with our buck. 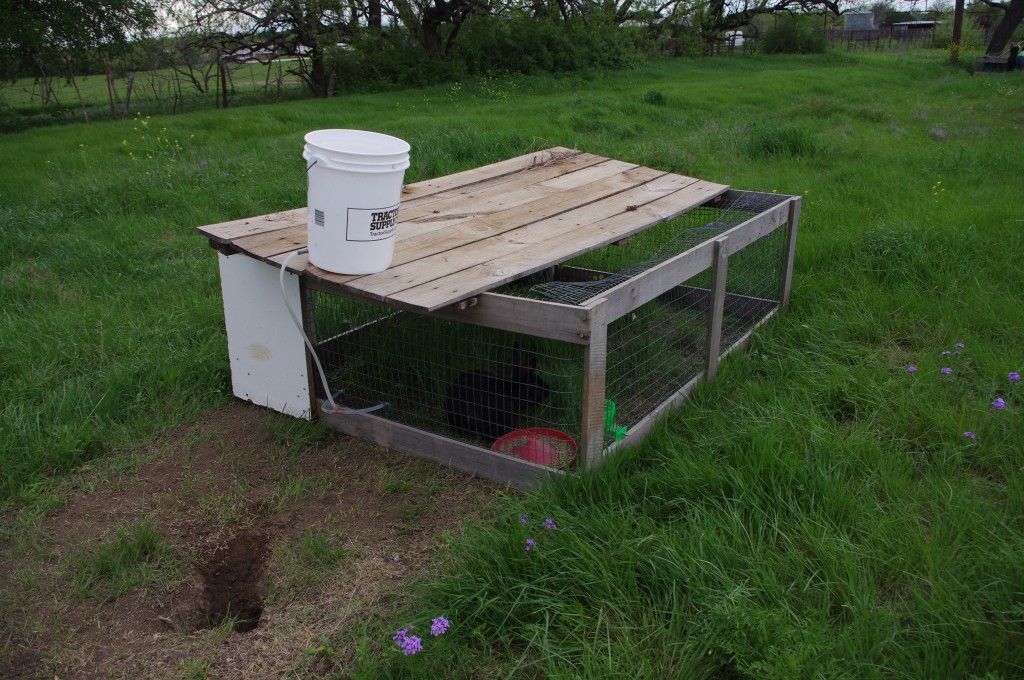 This pen is often used for just hatched chicks, but is doubling as a recuperation pen.

By morning the baby in the warming box had died.  Equally troublesome, the pen with our buck and this doe had nine dead babies. To top it off, our dogs, who normally treat the rabbits with interest but distance, were harassing that pen.  Both rabbits were severely stressed.   I was crushed and when I got word to my husband so was he.  What had we done wrong???

When we thought back, she had given birth to the litter she had just weaned in the colony pen.  We moved all of them out and into a separate pen when those babies were a few hours old.  We had no idea she could become pregnant the same day she gave birth, and that appeared to be exactly what happened.  Finally, perhaps because of the closeness of the pregnancies, she didn’t begin to nest until after I had removed the dead kits.

Its been about ten days since this surprising and sad turn of events.  The combined litters are doing well and growing quickly.  I have not yet separated this doe from our buck, because I did not want to cause either of them further stress.  I suspect she is already carrying another litter and will separate him from her in a week or so.  The heat in Texas is on the rise, we have already had several days over 80 degrees, so I think the adults will be moving indoors very soon. 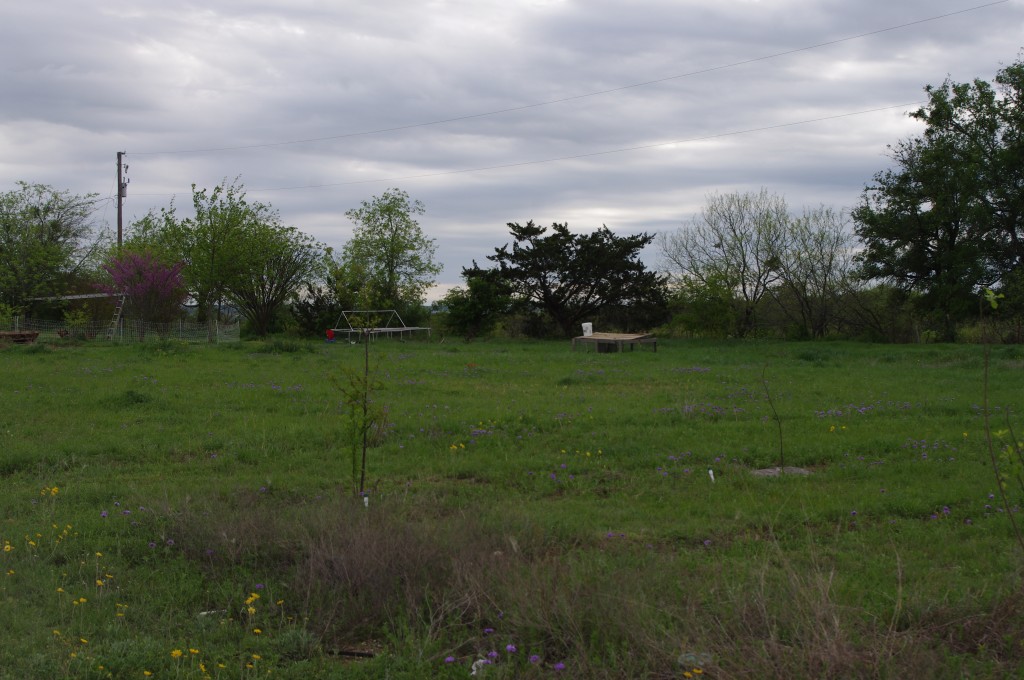 Two of the pens seen on pasture.

I think we will have our breeding rabbits in a colony pen again this fall, but I will be much more aware of the possibility for repeat breeding much sooner and will do my best to minimize the effects.  Also, next time I see a miracle baby in a pen you can bet I will be adding a nesting box as quickly as it can be filled.

At last you are here. Be bold. Sieze the moment. Be the first to take the opportunity to post a comment here.

We have beeen waiting for you to arrive here to provide your feedback. Now that you are here, go ahead and post a quick note. We would appreciate it.